As a former circus clown—no, really, I once drove the clown car for the Ringling Brother’s Circus—I’m not sure anyone expected me to build a thriving business that attracted talent from throughout the world to a small town in Northern Kentucky. But here we are, and that’s in large part due to the help I got from the Kentucky Small Business Development Center (SBDC).

With SBDC Day being on March 16, I wanted to take the opportunity to publicly share how the Kentucky SBDC and business coach, Lisa Brann, has helped my business and my community.

After growing up in Kenton County, I dropped out of college in 1996 to join the circus. I performed in 18 countries. I returned to college to get my theater degree in 1998, and later landed in New York City, then Chicago. Eventually, I made my way back to Ludlow, determined to continue my career as a circus artist. I bought an old movie theater with plans to turn it into a performance venue back in 2009.

Bank after bank turned me down for a loan, which led me to look into other ways to get my business off the ground.

The Ludlow Fire Department helped us get the theatre factory opened with interior demolition. For them, it served as training to breach walls, pull ceiling and practice search and rescue, and that was a huge boost to get our business off the ground.

And, I started working with the Kentucky SBDC, which has helped in innumerable ways. They helped me get our Ludlow Theater onto the National Park Service’s National Register of Historic Places, which was a 7-year long process. When I began fundraising for my brewery, they assisted in identifying tax incentives that helped win over investors and led to Bircus becoming the first-ever crowd-funded brewery.

They helped translate my innovative ideas for performance, education, and home-brewed concessions into a viable business. They took my why and helped me find the how.

Perhaps most importantly, they kept encouraging me. When I hit roadblocks and challenges, they’d say, “Just keep at it.”

I did, and it has paid off. An area that once mostly had to rely on neighboring communities for arts and culture now has had artists in our midst from 40 different countries.

A clown with a dream now has a business that employs, empowers, and welcomes an exceptionally diverse community and offers them growth and opportunities they didn’t have here before.

That’s why SBDC Day is important. Whether or not you’re an entrepreneur, the SBDC is helping businesses in your community—and therefore, your community itself—be better.

It sounds impossible for a former circus clown to open a circus in an old movie theater, let alone for that circus to evolve into a successful brewery, housed in a national historic site, playing host to artists from across the world. It sounds impossible, but it’s exactly my story—which is perfect, because the circus is where you come to experience the impossible. The Kentucky SBDC has helped me make the impossible, possible, right here in Northern Kentucky. 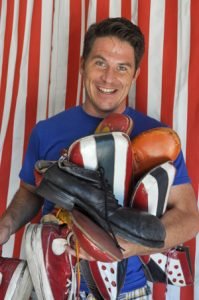 He’s a graduate of the Ringling Brother’s Clown College and has founded, owned, and operated businesses within the entertainment, education, and community health industries.

Miller is a 2021 recipient of the Kentucky SBDC’s Pacesetter Awards.

The Kentucky Small Business Development Center has been assisting the commonwealth’s small-business community since 1981. Through its statewide growing network of centers and an experienced and knowledgeable staff, the Kentucky SBDC provides unparalleled business coaching and training services that help existing business owners and potential entrepreneurs succeed. Our services include one-on-one business coaching, training workshops, market research, loan packaging help, assistance with financial projections and information needed to make informed business decisions. Kentucky SBDC is co-sponsored by the U.S. Small Business Administration and is administered by the University of Kentucky’s College of Agriculture, Food and Environment in partnership with regional academic institutions, economic development organizations, the private sector and the commonwealth of Kentucky.